King Drupada expressed his intention to bestow his daughter on the Brahmin, who had hit the mark and won the contest. This enraged the kings who had come to the Swayamvara, hoping to win the hand of Draupati. They considered it an insult that the kings were bypassed and a Brahmin was chosen as the groom for Princess Draupadi.

They talked among themselves in the following lines.

“The Vedic declaration prescribes the Swayamvara only for the Kshatriyas. This wretched king has invited us for the Swayamvara and has insulted all of us. He doesn’t deserve our respect. We should kill him and his son.”

Bhima uprooted a tree, divested it of its leaves by violently shaking the tree and stood before the kings like Yama standing with his mace. Arjuna also stood beside his brother, ready to use his bow.


Bhima and Arjuna assured Drupada “Don’t worry. We will fight your enemies.”

Krishna again pointed the brothers to Balarama and said "They are Bhima and Arjuna, as surely as I am Krishna. No one except Bhima can perform a feat like this."

Balarama replied “I am happy that the Pandavas and their mother Kunti, who is our father’s sister, have escaped death and are alive.”

The Brahmins present there came forward in support of Arjuna and offered to fight the kings. Arjuna smiled at them and said, “Stand aside and watch the fight as spectators. I will shower my arrows on these kings and subdue them the way one can bind the snakes through mantras."

The kings decided to confront Arjuna and Bhima intending to kill them though they were (believed to be) Brahmins, reasoning that killing a person who had entered a fight was not wrong. Karna was in the lead.

Karna sought out Arjuna, while King Salya of Madra (the maternal uncle of Nakula and Sahadeva) sought out Bhima. Initially Karna fell down unconscious by the impact of Arjuna’s arrows. But he regained consciousness and resumed his fight. The two fought with each other fiercely.

Duryodhana and others turned to the Brahmins and had a skirmish with them.

At one stage Karna told Arjuna, “Oh Brahmin! Observing your energy and the weapons you use, I wonder whether you are the embodiment of the science of weapons. Are you  Balarama, Indra or Vishnu?”

Arjuna replied, “I am neither an embodiment of weapons nor any of the persons whose names you mentioned. I am a Brahmin who has learnt the skills of weapons from my preceptor. I am here to vanquish you.”

After some time, Karna stopped fighting realizing that he could not overcome the energy of the Brahmin.

The fight between Bhima and Salya went on as a fight  between two equally strong warriors. After a while, Bhima lifted up Salya and threw him down. However, he did it without causing him much injury or pain.

Karna and other kings were alarmed by Bhima’s feat. They exclaimed “These Brahmins are excellent warriors. Who but Balarama, Drona or Arjuna can fight Karna? Who can fight Duryodhana except Krishna or Kripa? And who can overpower Salya except Balarama or Bhima? “

Krishna addressed the kings and said “Draupadi has been justly acquired by these Brahmins” and advised them to abandon the fight.

The kings accepted the fact that Draupadi was won by a Brahmin and returned to their kingdoms.

The Pandavas were surrounded and cheered by the Brahmins who were proud of the feat of Bhima and Arjuna, whom they considered to be Brahmins like themselves.

Eventually, the Pandavas  left the arena taking Draupadi along with them. The Brahmins and Krishna followed them.

Meanwhile, Kunti began to worry about her sons having not returned home even after a long time. She began to harbor fears about various kinds of mishaps that might have befallen them. She even doubted whether Vyasa had misguided them by advising them to participate in Draupadi’s Swayamvara.

It was only in the late afternoon that Arjuna,  entered the house in the company of many Brahmins.

Posted by Parthasarathy Rengaswami at 12:36 AM 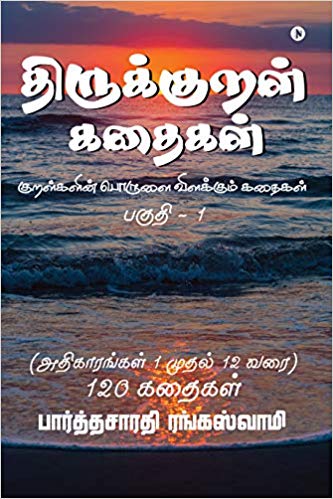 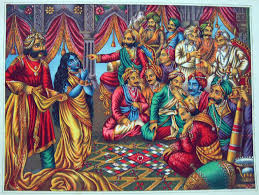 Parthasarathy Rengaswami
Everyone has an urge to share his or her thoughts, experiences, ideas and fantasies with others. If you like what I write, it serves the purpose of my writing. If you do not like what I write, I will be content with the satisfaction of giving expression to my thoughts.